I can't believe my little baby is five months old today! (I probably say that every month, don't I?) Here she is on her "birthday" this morning for your ooh-ing and ahh-ing. 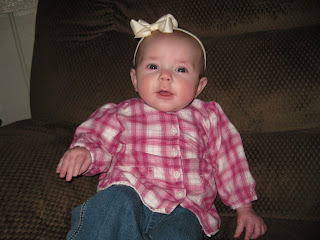 She has the roundest little head and face!
So what's new with us, since I'm a bad blogger these days? In baby milestones, little Miss A is still a little high maintenance but overall a pretty happy kid. She laughs a lot, especially when you tickle and kiss her feet, which she loves to try to eat. She hasn't rolled over yet, but hopefully that will come soon. We have tried feeding her rice cereal a few times but so far she just shoves it back out of her mouth, which is why we usually try before bath time! She has discovered she can make some of her toys make noise and is very pleased with herself when it happens. When she's feeling so inclined she can hold her own bottle, and she does pretty well sleeping all night now (I totally just jinxed myself, I'm sure).
She also LOVES her thumb and tries to shove it in her mouth even when not terribly convenient - like when other things are already in her mouth. Photo evidence:

(and yes, she is totally trying to watch TV in the first and last pics...)
In other news, we have spent a lot of time lately at doctor's appointments. ﻿Amelia had her first UTI in December, and a few weeks ago I had a feeling it was back. Unfortunately I was right. (In case you're wondering, the symptoms of her first infection were spitting up a lot and not eating well, and the second time her wet diapers smelled really strong in the morning.) The standard is that more than one UTI in an infant is grounds for testing, and coupled with the fact that she had no fever with her infections, chances were they were being caused by something anatomical.
Urinary reflux was the most likely culprit - instead of all the urine going through the urinary tract and exiting the body, some of it goes back into the kidneys, which leads to infection. The reflux is graded level 1-5, with 1 being the lowest degree and 5 being the worst. The higher numbers typically lead to surgery at some point, while the lower degrees are usually just outgrown. I read that 50% of all children with recurring UTIs have reflux, so I was pretty prepared to find out that was the case.
First we had a renal ultrasound, which showed her right kidney was larger than the left (I wasn't expecting that) and they suggested we see a urologist at Children's Hospital. We scheduled that appointment and once her infection was cleared up, we had a VCUG test done to check for the reflux. They used a catheter to send dye through her urinary tract to see if any urine goes back into her kidneys.
Long story shorter, she does in fact have urinary reflux, but currently only a level 1. Luckily this means right now she just stays on a daily low dose of antibiotics, and she will have the VCUG performed again in a year to see if she is outgrowing it. They said it's not uncommon for a kidney to be enlarged with this condition. It has been a little exhausting for Mommy while hauling her around and trying to entertain a very nosy baby while we did a lot of waiting, but all in all she was a trooper and I am hoping the worst of it is behind us.
So there you have it - I'll be back again someday, I promise!
Posted by MillerMama at 2:34 PM 1 comment: