It's hard to believe you are five. A whole hand. Because of your late August birthday, you won't go to kindergarten until next year. I am sure you could be ready this year - you write your name, Mommy, Daddy, and Bella without help. You can write almost all of your letters unassisted and are starting to make connections between letters and sounds. You continue to make amazing artwork for us, and coloring or drawing are some of your favorite things to do. You also love playing with Barbies and princess dolls.

I think the thing that has amazed me so much about you this year is your determination. When you want to learn something, you work and practice until you get it. We didn't do gymnastics this summer and yet your cartwheels have gotten a lot better because you do them constantly. One night a month or so ago you asked me how to snap your fingers. You watched me do it, tried, and then asked me to do it one more time while you watched intently. You were snapping your fingers within 24 hours. You've done amazingly well in swim lessons (you can now swim short distances unassisted). I hope that determination serves you well throughout life.

While you are still shy around people you don't know, you are so fearless in other ways. You climb everything and you've mastered the monkey bars. Unfortunately that led to a fall off your new swing set a couple of weeks ago - the result was a fractured elbow. You picked a bright yellow cast and didn't want anyone to sign it. Fortunately you're getting the cast off the day before your birthday party - a Tangled theme this year.

You can certainly be stubborn, but you are also still so sweet and loving. You love to give hugs and snuggle, and you love all of your cousins and are wonderful with Ian. He loves playing with you! All in all you are a very good natured kid, and you make us smile and laugh daily.

Today is a perfect sunny day, cool enough to have the doors and windows open - just like the day you were born. Happy 5th birthday, sweetheart. Here's to another great year! 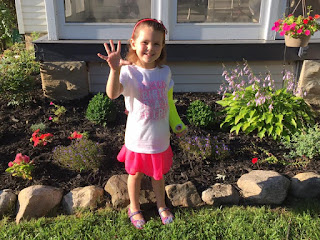 Posted by MillerMama at 12:33 PM No comments:

Last week marked three days filled with mixed emotions. Mother's Day on May 8th. Two days later, the due date of the little one I lost in October. And on Friday the 13th I turned 35.

And I am struggling.

I gave myself a few months "off" from baby thoughts. I wanted to enjoy vacation (which I did - perfect weather and wonderful time with my husband and baby girl). I wanted to be able to have an adult beverage at a couple of upcoming events. But in about a month, those will have passed. And I feel like I am no closer to a resolution.

The pregnancy announcements have been coming in waves in recent weeks, from friends in my online groups and one of my best friends from college. Another friend told me she's ready to try for #2. I've been hiding FB posts. I've been crying. I increased my meds a month or so ago, but I can't shake this off. I'm considering going back to counseling - I didn't feel much benefit from the woman I saw a few times, but the options here are few and far between. #smalltown

I need to talk to my husband, but I know he doesn't really understand. He's content where we are. And I am too, to an extent. I keep thinking of how simple our life is now, and how I don't want to turn Amelia's world upside down. But I watched baby videos of her the other day and my heart just aches. She's getting so big. Can I really move forward and never experience those baby days again? And while I know it's totally fine to only have one child, I am in the minority in my group of friends. I'm feeling "less than." It's a hard thing to explain.

I really can't even put into words where my heart is right now. I think about being done and I feel like there's a rock in my stomach. I think about starting over again and I panic.

"I don't know how long I can do this, he said. I think the universe has different plans for me & we sat there in silence & I thought to myself that this is the thing we all come to & this is the thing we all fight & if we are lucky enough to lose, our lives become beautiful with mystery again & I sat there silent because that is not something that can be said." storypeople.com

Where do we go from here?

Two losses in four months. I'm not even sure I have processed that with a couple of additional months behind me. I went to counseling a few times to try to sort out my emotions and decide whether we would try again. I started going to yoga to destress (which I love by the way). And I decided regardless, I needed a break. We needed a break. I had spent most of a six month time span in some stage of pregnancy - testing, blood work, ultrasounds, doctors' appointments, D&C, recovery, waiting, trying, repeat. I wanted to get back to myself and my family and some semblance of normalcy. I wanted to enjoy our beach vacation and drinks on the patio and playing outside with Amelia.

I was able to push it to the back of my mind for a bit.

But now as vacation and summer are approaching - as well as my first due date and my 35th birthday in May - I'm feeling the anxiety and the need to make a decision creeping back in. One day I feel convinced that we need another child. The next day (or often the same day) I can't imagine starting all over again. At this point there would be about six years between two kids and that seems like a big span. Too big. Time is ticking.

There's been an influx of pregnancy announcements in my news feed lately and I'm starting to avoid them. I get tears in my eyes and I hide the posts. I know my brother-in-law and his wife are TTC. And I hope they don't make an announcement to us in person. I am happy for all of them, but I am conflicted and anxious and sad about my own journey.

Chad and I don't talk about it much. He's content where we are, and I know the idea of starting all over is unappealing to him. And I can't say I disagree. At 4 and a half, Amelia is pretty independent and awesome. We're a year away from ditching daycare payments. But how can I say it's time to put my baby and mama years behind me? That it's time to sell the baby stuff in the basement? My one and only baby is growing up, and the idea of being DONE makes my heart so heavy.

My OB told me there was no reason to think I couldn't have another healthy pregnancy. That two miscarriages in a row was crappy, but since I had no issues with my pregnancy with Amelia, there was nothing indicating there was an underlying issue.

But what if we finally make the decision to try again and we lose that one too?

I bought this bracelet yesterday - the mantra I try to repeat when I'm getting overwhelmed by the what ifs. For now I'm trying to let it be, and hope to find peace with whatever resolution we come to. 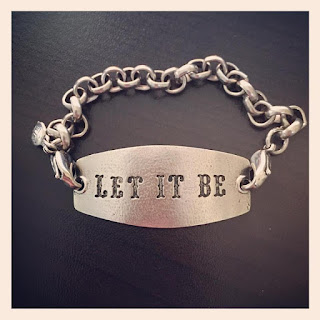 I got a positive pregnancy test the day after Christmas. I was nervous, cautiously excited, you name it. When I went through my miscarriage in October, I read something about pregnancy after a miscarriage, and the author said she tried to be excited, that the next baby deserved the same excitement and joy that she had felt with her first pregnancy. So I got on that train. I sorted the maternity clothes. I bought a few baby things and tucked them into the back of the closet. We told our close friends and family. I thought hey, I had a perfectly healthy pregnancy with Amelia. I had never had a loss before. These things just happen, and my "thing" had already happened. I was ready to start over and move on.

Yesterday I hit the 7 week mark. And I started spotting. Quite a bit. I called my OB's office because my first appointment was two days away. They told me to have bloodwork done yesterday when I could, and then to repeat it the morning before my appointment. So I went, had my blood drawn, and waited for the other shoe to drop.

I woke up this morning afraid to get out of bed. Afraid to go to the bathroom. But I had to get up, clearly. And as I feared, it wasn't just spotting this morning. *Cue shoe dropping* I called the OB's office back, and they still want me to do the bloodwork and appointment tomorrow. I know it needs to be done, but I don't know how to look at the ultrasound screen and see nothing again. How to leave that office again and go on with the rest of my day and week and month...

I had already considered that if we had another loss we may be done trying. While I was excited for another child, I was also terrified of starting over. Amelia is such an awesome kid. Sleep is awesome. Maybe we need to be content with our one perfect girl who I love so much I think my heart could explode some days. Maybe we look forward to Disney World and kindergarten and redecorating her big girl room and leave behind the thoughts of more daycare and nurseries and second car seats.

With two losses back to back, the doubt and irrational thoughts creep in. What's wrong with me? What did I do wrong? And yes, I know they are in fact irrational thoughts. But they're there nonetheless. So now I'm back in limbo again. Trying to find a way to move on again. Having to make decisions again. And yeah, it sucks. It really, really sucks.

"When you try your best, but you don't succeed
When you get what you want, but not what you need
When you feel so tired, but you can't sleep
Stuck in reverse

And the tears come streaming down your face
When you lose something you can't replace
When you love someone but it goes to waste
Could it be worse?

Lights will guide you home
And ignite your bones
And I will try to fix you..." - Coldplay
Posted by MillerMama at 10:18 AM 2 comments: