All of those parents who told me, "Time flies," who I didn't believe when we were in the thick of the tough stuff in your first year, the days that seemed never ending... oh sweet girl. They were right. You - my BABY - are TWO. Or as you have been telling everyone who asks, "twos." I love you more than I could ever put into words and have so enjoyed watching you grow over the past year, from baby to toddler. I look at your pictures and can't believe how much you have changed in such a seemingly short time.

What's going on in your life right now? We spent our first summer together of mommy being off work. You started to learn how to swim (on your own terms, just like everything else in life!). You fearlessly climbed the biggest slides at the playground and slid down. You wanted to see the elephants at the zoo (just like "ell-int" you sleep with). You decided you needed a cup of water in your crib every night, which made mommy feel like you were a bit too grown up. Just before you started your new "school" when mommy went back to work, you finally stopped taking bottles. You've had a little bit of a hard time adjusting to your new school, but you're working on it. I know despite your big personality and fearless ways, you are a lot like your mama was when I was young - shy and unsure of new people and places.

You love playing with dolls - feeding them, holding them, tucking them in for "night night". Playing pretend is a big activitiy these days. You love "tiddy tats". You call cows "moos" and chips "blips." Speaking of which, you are more into "nacks" than eating meals, but you are still a great eater who loves cheese and fruit and always want a bite of anything mommy and daddy are eating. Your two year molars - the last of your baby teeth - are just barely starting to peek through, and sometimes you still wake up a time or two at night, here and there. At your two-year check up we learned you grew four inches in the past six months! You're now 29 lbs 3 oz, and 34.5 inches tall.

You love to sing "The Wheels on the Bus," "Itsy Bitsy Spider," and "Twinkle, Twinkle Little Star," and often do so into your microphone. You can sing your ABCs and count to 13, and we're working on colors and shapes. You love to watch "Buppies" (Bubble Guppies), play with guitars, and read books.

It is so hard for me to capture in a few paragraphs all of the ways you light up our lives - all of the amazing new things you learn and do every single day. We love you so much, munchkinpants. Happy Twos-day! 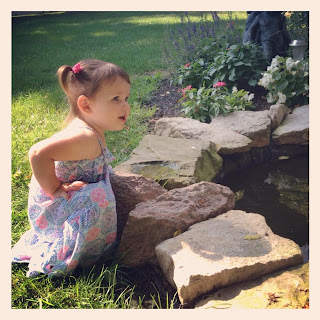 How I Spent My Summer Vacation

Long time no post, bloggy friends. I apologize. I wasn't on the computer at all this summer, and Blogger has decided it hates me. There were no blogs showing in my reader feed until now, so I'm sorry I haven't caught up with you all - on to that soon!

My summer break started in mid-June, and I returned to work this past Monday. It's been an adjustment for sure - getting up early, A starting a new daycare (there have been tears but she seems to be adjusting - maybe more on that later), and remembering what it's like to only have a few hours a day for munchkin time, me time, the hubby, and anything else I need to cram into my day.

But back to summer vacation - here's what's been going on with me for the past two months or so:


Family Time/Party Time
We enjoyed spending time with my cousin from Arizona, Fourth of July with family in from Florida and Georgia, went to my cousin's daughter's 4th birthday party, another friend's son's first birthday party, a baby shower for an amazing friend expecting her rainbow baby, celebrated my dad's birthday, had lots of cookouts, and ended the summer at a wedding for a family friend (see bottom right selfie). 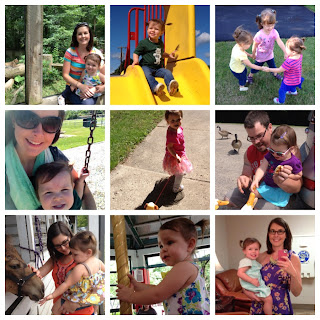 We tried out story time at the library - epic fail. A was the oldest in her class and just wasn't having it. She spent more time trying to run out of the room than listening to stories or participating in songs. Pulling all the books off the shelf was another fun activity there.
Mommy and Me swim lessons lasted for two solid weeks, during the chilliest part of summer. We had a couple of rough days, and far be it from my child to actually follow what the instructors wanted her to do (kick board? No way!) but by the end she was really swimming!
(YouTube also hates me and won't let me embed a video.
She really gets going around the 50 second mark.)
Just keep swimming...
We also took trips to a local dairy farm with animals and awesome ice cream, the zoo (first carousel ride!), and the fair. There were numerous trips to the park and school playground near our house. Oh, and she saw her first theater movie. Monsters University - she did surprising well for the first hour, and then got a little squirmy (and kept shouting, "Oh no!" when things happened). There were also a few playdates, morning walks, and of course, some lazy time lounging around the house. 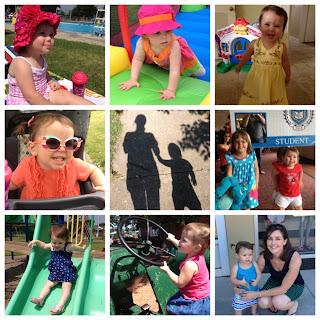 And speaking of "Fun Stuff," Mama got a girls' night to herself to go see Fun. as well - outdoors on one of the hottest days of summe - shew!
Though I am obviously sad our summer has ended, I feel so incredibly blessed to have had this time with A. I can't believe how much she is growing and changing and becoming far more toddler than baby. I'm already looking forward to next summer. Next up - my baby is turning TWO two weeks from today! I've been planning her "Tea for Two" party for awhile and will be sure to share more after the party. I'll also tell you about all of the awesome stuff she's up to in her 2 year letter.
If you want to see more of what's going on with us, I'm participating in the August #fmsphotoaday challenge on Instagram - sem513.
______________________________________________
And, as it turns out, I just saw this is my 100th blog post. I feel like that deserves some sort of celebration, but alas, I have no cake!
﻿
﻿
Posted by MillerMama at 9:01 AM 3 comments: