Breathe in, breathe out

Breathing. You know, it's pretty important. But it's been hard to catch a break or a breath for the past couple of months around our house.

Sleep. Also important. Also MIA in our house for about the past two months. First it was Amelia's canine teeth. Oh. Em. Gee. Everyone talks about the molars, but the more I hear from other mamas, the more I learn the eye teeth are the ones that really get you. Amelia was waking up at least once a night, every night. Often twice. We eventually had to start putting her in bed with us because she wouldn't go back to sleep, which meant none of us were getting any sleep.

Then came the urinary tract infection. #4. I'll admit I was hoping her urinary reflux was gone. That she had magically outgrown it. It had been several months since she had an infection, and we were postponing a repeat of her VCUG until she turns two so she can be sedated. She got a high fever (104-105) out of nowhere, so obviously I called the pediatrician. We had to subject her to the catheter again (I hate, hate, HATE it). And the cultures came back positive, of course. She was so sick for the better part of a week. She didn't even touch her toys and wanted nothing but to snuggle on the couch and watch Dora and Bubble Guppies. And to sleep in bed with us. So ten days of antibiotics later, we have upped the dose of her regular prophylactic antibiotic to hopefully keep the infections at bay.

Add to all of this that I am beyond busy at work and gearing up for a week off for spring break (awesome, but I have SO much work to do!), and I was operating on very little sleep for a very long time, and I was one tired mama. I had forgotten how awful sleep deprivation is, and how much it affects every aspect of life.

However, on the positive side, my awesome munchkin is talking more every day. She has added some phrases to her repetoire ("Aw man! - like Swiper from Dora, used in context, and recently, "I don't know," which sounds like, "Don doe!" when you ask her something like, "Amelia, where are your socks?" This is accompanied by a very serious, concerned expression and she will then help you look for the objects in question.) She loves to brush her "deeth!" Last night there was a cow in a commercial and she mooed at the tv.

We started Mommy & Me gymnastics on Saturday mornings. The first two classes didn't go so well, but I know she wasn't feeling well. At the third, I realized the key to her cooperation is making sure she gets a bottle beforehand (still can't break away from those damn bottles 2-3 times a day). She loved forward rolls and I couldn't get her off the trampoline. 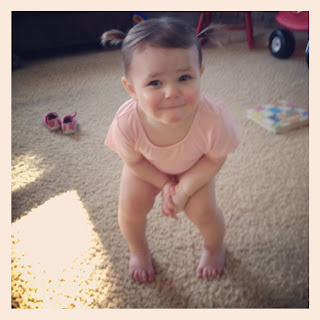 Ready for the 2028 Olympics
﻿
I'm very much looking forward to six weeks off this summer to spend time with her and go on fun outings. (If summer ever gets here, that is. We had our 5th snow day for my school district yesterday. Yup, on March 25. I am so over winter.) I'll leave you with a couple more pics of my sweet, silly girl. 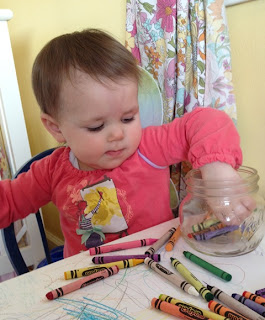 At her cousin's fairy princess party. 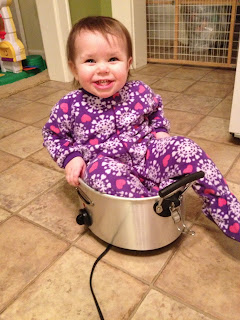 Amelia stew for dinner! ("Cheese!" she said. Then, "Tuck!)
" 'Cause you can't jump the track, we're like cars on a cable/And life's like an hourglass, glued to the table/ No one can find the rewind button, girl/So cradle your head in your hands/And breathe... just breathe..."
-Anna Nalick
﻿
Posted by MillerMama at 11:51 AM 1 comment: