I've read a lot of those blog posts in recent months - the ones that appear in my Facebook feed, telling me it's ok to be an imperfect mom. And I appreciate that in an age of pressure from Pinterest and supermom Facebook posts and the like, the truth about motherhood is being shared. A post I read today got me thinking about those moments - the ones you can never expect. The ones that I was sure would never happen to (or be) me. My munchkin is approaching her second birthday, and while I love her more than anything, it has not been an easy journey to get to where we are. Forget "What to Expect When You're Expecting" - this is my "What You Couldn't Expect When You Were Expecting" list. The hard truth. Because as it turns out, I didn't know...

...what colic was until Miss A spent hour after hour, day after day, month after month screaming and crying. That our first night at home wouldn't be picturesque and full of snuggles. That instead it would be full of screaming (her) and sobbing (me). I didn't know the frustration or helplessness or desperation I would feel, to the point where I dreamed about running away from home for a few hours or even a few days.

...that I would be so exhausted during the middle of the night wakeups and feedings that I would fall asleep with her on my chest, only to wake up panicked hours later, afraid I had dropped or smothered her. That I would feel so lonely and helpless at 2am (and 3...and 5...) that I would cry while she cried. And sometimes before I even went to bed for the night, knowing what was coming.

...that I would come to greatly dislike breastfeeding because it further isolated me (having to go into another room to feed her around male family members) and because I was the only one who could feed her (no time to pump when you have to hold your child 20 hours a day, lest the crying started again). That despite that dislike, I would feel immense guilt and sadness when I decided to quit.

...that physically my child would not be perfect. From jaundice at day 1, to reflux/swallowing/dairy issues, to urinary tract infections starting at 4 months, to majorly bowed legs that continue to cause her fall more than other toddlers. It seemed there was something every week, every month. The doctor's appointments, the tests, the hospital visits...I have driven the 45 minute trips alone with my baby, entertained her in countless waiting rooms, and been emotionally exhausted more times than I care to remember.

...that it would take until she was 20 months old for her to consistently sleep through the night, to be able to soothe herself, to be able to be laid down in her crib still awake. That it would have been two years since I had slept for 7+ hours at a stretch for more than a week at a time.

...that I would struggle with the guilt of working full-time - longing to stay at home with her, wanting to make our time together count, but feeling so tired or consumed by chores when I got home that she would spend a bit too much time watching tv or playing without me.

...that I would be so fiercely protective of her, her schedule, her routines that it would be hard for me to let anyone else care for her. Even her own dad.

...that despite all of our struggles, I would be amazed every single day watching her grow. That waiting 19 months for her to call me mama would make it that much sweeter to hear. That I would get so much joy when she learned a new word or phrase. That seeing her sweet face in the mornings accompanied by her tiny, excited "hi!" would erase the cloud of the previous day's shortcomings on my part.

I could never, ever have known or expected the way things would go. I can't be sappy and say I wouldn't change a thing. But this journey of munchkin and mama is uniquely ours, and at least I can say it has never been dull or predictable! 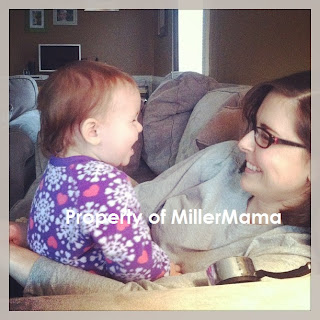