Thank you to the lovely Kathy for giving me some bling in the form of a blogging award! Kathy is an awesome woman dealing with the struggles of infertility. And we have a lot of wacky stuff in common, which is always fun. In short, she rocks. Thanks for thinking of me, Kathy!

It seems there are rules to be followed when you receive this award:
1. Thank and link back to the person who gave you this award. (see above)
2. Share 7 things about yourself.
3. Award 15 recently discovered new bloggers.
4. Contact these bloggers and let them know about the award.

So here goes - all you ever wanted to know (or not) about me:
1. Going to Italy at some point in my life is #1 on my bucket list.

2. I hate mushrooms and have an irrational fear of baby corn. Not like a food aversion... like... just looking at it creeps me out in a serious way.

3. I still drive the first car I ever bought (a 2001 Mistubishi Eclipse) and I am going to be so devastated when I have to get rid of it this summer since I can't even fit a carseat in it. Looks like this one:

4. I have a big extended family and I love it. My mom has 6 sisters and 1 brother, and I have 12 first cousins on that side (most of whom are married) plus all of their kids...holidays sometimes mean 50 of us in the same house!

5. I love words and grammar. My degree is in journalism and I love to write. Basically I am a word nerd.

6. If I could have any job I would be a preschool or kindergarten teacher.

7. I like drinking out of a glass, not a plastic cup.

Since I'll be 9 weeks tomorrow, I thought maybe I would finally do one of those little updates that everyone posts in their blog. No bump pic or anything fun yet - maybe in a week or two!

How far along? 9 weeks tomorrow

Weight gain/loss: I'm down 1 or 2 lbs, depending on the day

Maternity clothes? Not wearing them, but I've bought some. Old Navy had some serious clearance deals! And today I broke out the BeBand because my jeans were a little uncomfortably snug. Probably just because I dried them, but it feels lovely!

Stretch marks? I hope not at this point!

Sleep? I am always tired! I crashed on the couch last night at 8:00.

Best moment this week? Telling one of my best friends from college.

Gender: Well, I am female...the kid? One or the other!

What I miss: Fast food and sweets - I've had no appetite for either and I am normally a sugar fiend. And coffee.

What I'm looking forward to: Hearing the heartbeat in two weeks!
Posted by MillerMama at 11:01 AM 4 comments:

I've shared pictures of my niece several times, but I have also mentioned that I have another one on the way. My brother-in-law and sister-in-law are expecting their little girl on Feb. 21. I hosted a baby shower this past Sunday at my house and think it turned out pretty well! It was so nice to have a family gathering at our house - that's why we bought it! We invited about 40 people and about 20 ended up showing up (what is it with people not knowing what "RSVP" means these days?!).

Everyone who knows I am pregnant kept saying "You'd better have a girl!" because she got SO many clothes (which honestly I think is a little silly because she will never wear them all, and who knows what size she'll be at what point). Her aunt and grandma got her a tote with 64 outfits in it!

It was very surreal to think that this is all going to be happening to me a few months down the road, leading me to realize once again that being pregnant actually leads to a baby that comes home and lives with you! Here are a couple of pics from the big day.

The diaper cake my MIL made (I helped roll diapers!): 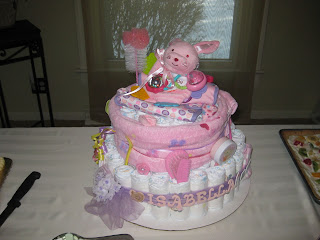 Serious present haul (and everyone playing a game) 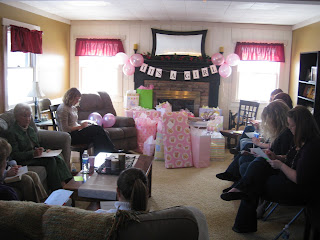 As I was busy playing hostess I didn't get many pictures of the mommy-to-be with her guests or of my other shower creativity like the cute basket of favors I put together. Oh well! It was a fun day, and I can't wait to meet my new niece!
Posted by MillerMama at 9:12 AM 2 comments:

My best friend, A, and I first met in college. We were paired up through the random freshman housing lottery that somehow knew we were soul mates. I remember being so scared to live with a total stranger, but after staying up talking all night our first night, we knew we we had met for a reason! We spent four years of college doing everything together and while we live 3 hours apart now, we're still very close. We've been through so many major life events together and we catch up over the phone whenever we can to talk about life or just something silly.

And now we're going to be pregnant together, too! We had discussed and agonized about TTC over the phone for months, and my hubby and I started trying about 3 months before they did. So I taught her all about charting and OPKs - and it paid off, because it only took two cycles for her to get her BFP! Even though we don't live close to each other, I'm so excited to be going through this journey "together." I love her so much, and I am hoping and praying for happy, healthy pregnancies for both of us, with babies only 3 weeks apart!

And, in honor of our college days and because I've been out of the song lyrics loop in the blog for awhile, I leave you with some classic Bon Jovi:

"We gotta hold on to what we got/It doesn't make a difference if we make it or not/We've got each other and that's a lot for love/We'll give it a shot/Oh, we're halfway there/Oh, livin' on a prayer/Take my hand, and we'll make it I swear/Oh, livin' on a prayer..."
Posted by MillerMama at 3:55 PM 2 comments:

What a difference a year makes

On New Year's Eve 2009, I was headed to Columbus to celebrate with my college roommates and their significant others when my mom called: "Your sister's at the hospital! She's on her way!" My niece decided to make her entrance into the world a few weeks early, and on the way to Columbus I got to stop at the hospital and meet her for the first time. 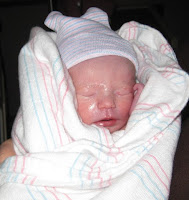 ﻿
Twelve months later, she has grown so much - and so have I. Our lives have changed a lot this year when I stop to think about it. Let me count the ways:
1. New jobs. I left my super stressful job after a year and a half for a much slower paced one (that came with a huge pay cut). It was a "big kid" decision for me, one where I ulitmately chose my happiness and health over the almighty dollar. My husband also started working full time for his uncle after a string of temp jobs following being laid off for a year.

2. I turned 29. Not a monumental occasion, but next year's gonna be a doozy.

3. One year of marriage under our belts. We celebrated our 1st anniversary in Nashville in June - the first vacation we've ever taken by ourselves! It was a weird time to go because it was just after the big flood they had but it was still nice to spend time together.

4. The trials and tribulations of homeownership. We endured a roller coaster ride as we tried to sell, then ultimately rent, our condo to find a bigger house that felt like home. We lived with my inlaws for several weeks in between, and are now loving our new place while still figuring out how to be landlords!


5. And of course, TTC/BFP land. We talked about it for months, finally started trying, and endured five months of frustration. Then we ended the year on the best note possible!
So here it is - 2011. My 30th year of life. And this time next year, we'll have a little one of our own to join his/her cousin (and another cousin on my husband's side). From a little 5 lb baby to a 1-year-old big girl, my niece is proof that life can change dramatically in 12 short months. As for the coming year, I'm excited, I'm terrified, and I can't wait to see what it brings. Happy New Year! 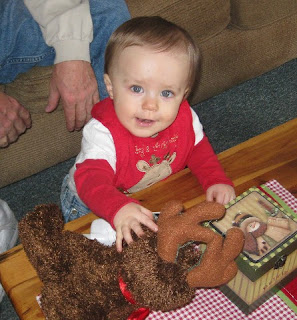