I'm just going to lay it out there for the blogosphere and myself - I have really started to question lately if I am cut out to be a mom. And the thought of that tears at the core of every emotion in my heart. All new moms doubt themselves, I know. We all wonder if we're doing a good enough job, whether we're really cut out for this. I love my baby. My daughter. Wow. Just to say those words - "my daughter". That's crazy and amazing. But I find I am questioning myself more and more.

Amelia was sick last week. Really sick. She has RSV, which essentially is a really nasty cold virus, complete with awful wheezing and a rattly cough and lots and lots of well...snot. So I stayed home with her for three days. And I thought I might lose my mind. On a good day she needs entertained constantly. Throw in her being sick and nothing made her happy. I know she was miserable. I felt awful that I couldn't make her feel better. But I was just.so.frustrated. And when my mom came to help one day for a few hours, she kept saying to me, "She can't help it, she's sick. Poor baby." I realize this. Obviously. But I felt like an awful, terrible mother because all I wanted to do was run away. The next day my mom asked if I am ok. If maybe I have PPD, or if something is bothering me. Well, yeah. EVERYTHING is bothering me. And I don't know how to fix it.

I first referenced it here. I was trying to think of a way to put it into words and I came up with this little analogy:

Imagine all your life you've wanted to be a chef. When you were little, your favorite toys were your toy kitchen and little plastic food items. You "cooked" for your friends and family. As you got older, you helped your mom in the kitchen and were fascinated by the process and results. The measuring, the stirring, the taste testing - you loved every minute. You got your first job working in a restaurant, and your love of food only grew. You knew more than anything that you wanted to be a chef, to run your own restaurant, and that you would stop at nothing to acheive your dream.

You worked your way through the ranks, as a prep cook, a line cook, eventually a sous chef, soaking up every bit of food knowledge you could until one day you were ready - your hard work was about to pay off and your dreams were about to come true. You're going to open your own restaurant.

After months of hard work, you're ready for your big debut, and you're so excited you're already making plans for your second restaurant. You've carefully planned a delicious menu, complete with dishes you know your patrons will love. You add a couple of elegant desserts to round things out, even though the entrees are what you've poured your heart and soul into. The customers come, the orders pass through the kitchen, and you start getting feedback from your servers - "They love the food but what everyone is really raving about is the awesome cake."

The cake? What about the entrees you painstakingly planned and prepared? Sure, the cake was good, but that wasn't supposed to be the star of the show. The critics' reviews the next day echo the same results: "Excellent dinner, extraordinary dessert. The most beautiful and delicious cake I've ever eaten." No...no, this wasn't how it was supposed to go! Day after day the restaurant is filled with customers as you've always dreamed, but all they want is dessert. And you realize you have to face facts. If you're going to succeed at this you're going to have to run a bakery, not a gourmet restaurant. Your vision, the dream you've had and prepared for your whole life...it's not going to turn out the way you'd planned.

So you make the cakes. The detail you have to devote to decorating them is far more exhausting than the menus you're used to. Yet everyone raves, and you're more successful than you'd ever dreamed. But part of your heart aches because this wasn't the dream you had. You're proud of your success, enjoy making people happy, but you can't let go of the part of the dream that didn't come to be. You look at the friends you went to culinary school with and see their successful restaurants and you wonder why you can't have what they have. You wonder why you can't just be happy with your beautiful cakes.

That's where I am. And I don't know what to do with that. As I read more online, maybe what I'm feeling could be PPD. I had always envisioned PPD meaning you were sobbing and unable to get out of bed and wanting to drown your baby, and that's not me. But I think maybe I need to own up to the fact that this is a possibility. I've been to therapy and been on medication for depression years ago, and I really didn't want to go down that road again. But I don't want to cheat my baby girl or myself. I need to get to a place where I love my precious, beautiful cake and enjoy being the baker.
Posted by MillerMama at 10:18 AM 5 comments:

We've all heard it - kids are expensive. I used one of those useless online calculators to tell me how much my child would cost before I had her. I don't remember what it told me, but as it turns out my kiddo is more expensive than most.

The biggest expense is feeding her. She's on Similac Alimentum formula (almost twice as expensive as normal formula, in case you didn't know, and twice as smelly) because it seems she has quite the sensitive tummy. In addition, following a modified barium swallow test we had done several months ago (did I mention that somewhere? I can't remember...) it was advised that we thicken her bottles with a gel thickener. The test showed she was at risk for aspirating non-thickened liquids (sucking them into her lungs). And then there's the Prevacid that she takes twice a day because of her reflux. And the purees she eats every day.

Throw in another $100/week for the babysitter (I know, we get off cheap compared to a lot of people!), and that means my child costs about $773 a month. HOLY CRAP. Oh, and did I mention a $15 copay every time we go to the doctor or have had tests run? I can't even begin to calculate that. (Well, I could...but I'm too lazy.)

The plan has been to start weaning her off the expensive stuff and Prevacid, but so far we haven't been successful. It's worth it, of course, to keep her happy and healthy. Like this: 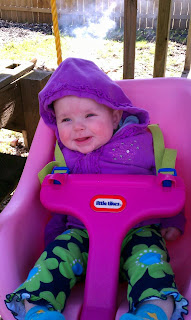 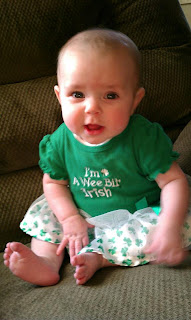 But if this continues, she'd better find a job before she hits kindergarten.﻿
Posted by MillerMama at 3:36 PM 3 comments: