She's still a she!

Today was our anatomy scan - I was a little nervous but everything was great! Unfortunately my hubby wasn't able to take off work, so mom was flying solo for this one. Baby girl's heart, kidneys, spine and all looked good, and the tech confirmed she is indeed a girl! (Not going to lie...I was a little nervous about that too! Especially with all the girly stuff I've already bought...)

Of course she was kicking up a storm all day yesterday and today she barely moved - except to open and close her mouth and to wave at me! :) We got a DVD of the u/s - here's a brief clip:


Baby Miller says, "Hi everyone!"
More good news is that my cervix looked great (I had a LEEP years ago and was worried about that). My OB did tell me that my placenta is "a little low" but that she definitely is not worried about it at this point. She said, "Really this just means you'll get another ultrasound at 30 weeks." Which of course makes me happy since I couldn't believe this would be the last time we saw our little girl before we see her for real! So hopefully that situation will resolve itself - otherwise I would need a C-section.

Finally, they will keep my due date at Aug. 31 but I am going with Aug. 27 - the date Fertility Friend originally gave me, which matched up perfectly with her measurements today. (If you recall I'd gotten two different dates - both ahead of that - with my prevous two ultrasounds.) That's the day after my grandma's birthday (which she shares with my aunt) and we MAY name baby girl after her.

Next appointment is the end of April when I start rotating through the OBs at my practice. Fun fact - the one I see next is the one who delivered my sister when she was born!

Otherwise we are still doing well - I've had some hip pain and round ligament pain that was bad enough to wake me up the other night but overall I can't complain. And I've felt plenty of kicks and saw them from the outside last night as well. I can't wait until my husband feels them too!
Posted by MillerMama at 6:30 PM 4 comments:

We're approaching the halfway mark! How is that possible?! I'm starting to look around the house at all the projects that need to be done before the baby comes and freak out a little. Deep breaths... we need to paint our staircase/hallways and I MUST clean out the spare room that is going to be the nursery (more on that coming soon). We also need a new furnace/air conditioning because there currently is no heat in the nursery (just a worthless baseboard heater) and the upstairs is cooled by a window a/c unit. Luckily my hubby works for his uncle's HVAC company - it's just a matter of finding the money and time to get it done. Then there's the yard...ugh. A landscaper I am not, and we need a new fence (again...probably more to come on that later).
Our baby girl still doesn't have a name. We can't agree on anything we love, and my mom keeps telling me we'll come across something but I don't know how there can be any names we haven't seen yet! She also says I'm picky. Well, that much is true.
Here's update for the week (which clearly I only post when I randomly feel like it):
How far along are you?: 18 weeks
How big is baby? She's a sweet potato today.
Weight gain/loss?: +6-ish lbs
Stretch marks?: no, hoping I don't get them (well...does anyone WANT stretch marks?)
Maternity clothes?: My pants are definitely snug, but the maternity pants are still a little big. I've got a couple pairs of work pants that still fit (unbuttoned) and a couple pairs of jeans, but I wish it would get warm so I could wear dresses and skirts!
Sleep?: Some nights I wake up multiple times - last night was probably the best night's sleep I've gotten for awhile. I'm thinking it might be because I tried out my prenatal yoga DVD again.
Best moment this week?: I am pretty sure I felt some kicks last week and Monday but nothing consistent.
Food cravings?: Salty stuff.
Gender?: Hopefully she stays a girl after our anatomy scan next Thurs!
Movement?: See above.
Belly button?: Still there.
Symptoms?: Really can't complain.
What do I miss?: Wine and beer, as always.
Here I am on Monday night at 17w 4d. I think the mat pants accentuate my little bump! (I also came to realize in looking at this picture that my glasses are seriously crooked.) 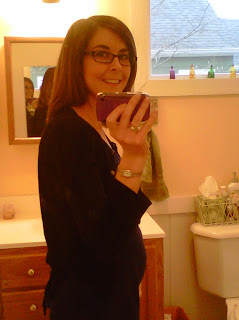 Posted by MillerMama at 10:46 AM No comments:

I complain a lot. I'll admit it. Today I'm mad because my Blackberry magically decided it won't charge anymore and I'm addicted to my phone. I feel like I'm getting a cold (though it could just be allergies - thank you, warmer weather!). I'm Irish and it's St. Patrick's Day and I can't drink a green beer.


But all in all, I realize I am very lucky. In the past week I've seen a lot of people facing big challenges in their lives. My good Bumpie friend Kathy (check out her blog here) has been battling infertility and just found out she has thyroid cancer. A treatable type, thankfully. But she has gone through so much! Family friends of ours lost a loved one this week and now have another family member hospitalized. And another friend has family in Japan near the area of the nuclear power plant that is in danger of meltdown (they have travelled south to be with family).
So on this Thankful Thursday full of symbols of luck, I am reminded of just how lucky I am. Lucky to be unable to drink because I am pregnant with a healthy baby girl. Lucky to have a husband who cooks me dinner every night and is fond of giving me hugs for no reason. Lucky to have a supportive, healthy family who are all safely nearby. Lucky to have wonderful friends, both in real life and through my online connections. And for those who fall into the latter group, a little Irish blessing for you:

"May God give you...
For every storm, a rainbow,
For every tear, a smile,
For every care, a promise,
And a blessing in each trial.
For every problem life sends,
A faithful friend to share,
For every sigh, a sweet song,
And an answer for each prayer."
Posted by MillerMama at 9:12 AM 3 comments:

How big is baby?: the size of an avocado - maybe I won't be eating guacamole this week...
Weight gain/loss?: +5 lbs. and about 3 of those are in the last week!
Stretch marks?: Nope, but my belly is seriously itchy.
Maternity clothes?: Broke out my mat work pants yesterday, mostly because my regular ones were dirty. They're still a little big but quite comfy! Today I'm sporting the BeBand.
Sleep?: It varies. One night this week I woke up every hour, then the next night I slept SO well.

Best moment this week?: Finding out we're having a girl!
Food cravings?: Depends on the day.
Gender?: Refer back two questions ;)
Movement?: Not yet but I can't wait to feel it!
Belly button?: Still there

Symptoms?: Lots of stretching/growing pains.
What do I miss?: We went for Mexican last weekend and I would've killed for a Corona Light.
What I'm looking forward to this week? Totally not baby related, but I'm going to see Lady Gaga tonight with a friend and I am SO excited!
Here, finally, is a bump shot because my stomach actually seems to be growing! 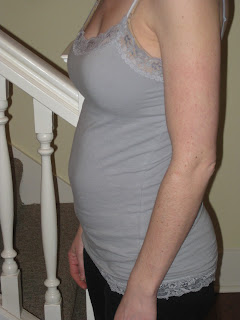 Yesterday we had our elective u/s in Columbus (about an hour away from our house) to find out the sex. I felt like a kid on Christmas morning - so anxious! As I was getting ready I thought, "Wouldn't it be funny if we heard on song on the radio that was a sign as to what we're having?" And the second we got in the car Brad Paisley's "Anything Like Me" came on:

"I remember saying I don't care either way
Just as long as he or she is healthy, I'm ok
Then the doctor pointed to the corner of the screen
And said, 'You see that thing right there - well you know what that means.'

And I started wondering who he was going to be
And I thought heaven help us if he's anything like me."
And I thought - it's a boy! MH even said, "Do you think this is a sign?" I said, "I guess we'll know soon!"

We got to the u/s place and got in right away. The tech started doing all sorts of measurements, looking from different angles, and I wanted to scream, "Just TELL us!" because I couldn't see anything one way or the other. Finally she said, "I'm 100% sure...it's...a girl!" I was so happy! Obviously I would've been happy either way, but I was really hoping for a little girl. MH didn't care one way or the other, so he was happy too.

Here are some pics (I have to confess the 4d ones creep me out a little!): 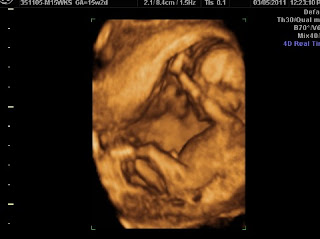 Mom! Let me out of here! 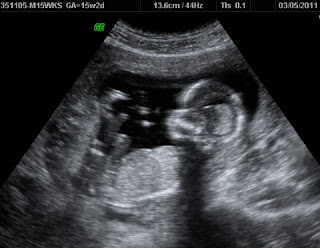 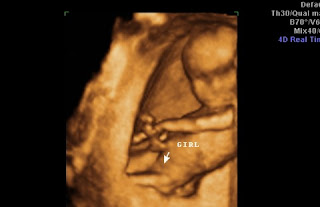 Here you can kind of see the lack of "parts" proving she's a girl.
(Her arm is at the front of the screen and the umbilical cord is toward the middle.)
She (wow, I have a SHE!) was moving around a lot more this time because they told me to drink something cold before we went in. Her heart rate was in the 150s. And she's measuring ahead again! I'll be interested to see what my final EDD is when we have our anatomy scan on March 31 because so far here are the dates I've gotten:
So now there is another country song that fits our lives, by Carrie Underwood:
"Since the day they got married
He'd been praying for a little baby boy
Someone he could take fishing
Throw the football and be his pride and joy
He could already see him holding that trophy
Taking his team to state
But when the nurse came in with a little pink blanket
All those big dreams changed.

And now he's wrapped around her finger
She's the center of his whole world
And his heart belongs to that sweet little beautiful, wonderful, perfect all-American girl."
Posted by MillerMama at 8:11 AM 10 comments: